Ending a 'nightmare' in Venezuela: How the US government brought seven Americans home 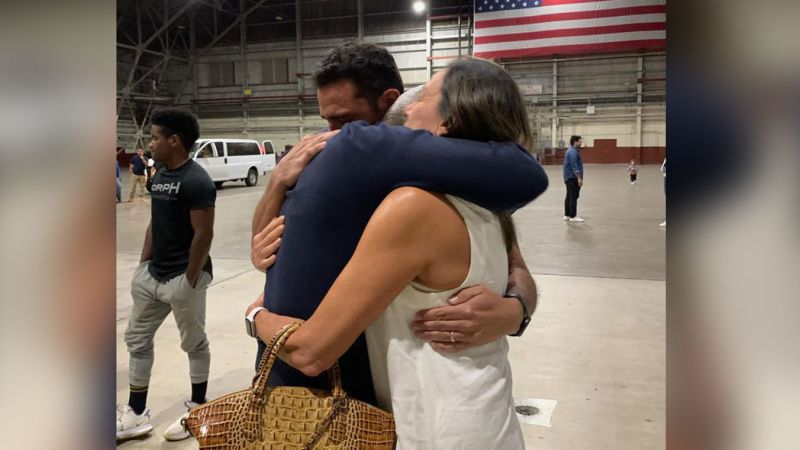 Carstens had brought home two Americans – the sixth member of the “Citgo 6,” Gustavo Cárdenas, as well as Cuban-US dual citizen Jorge Alberto Fernandez – in March, but another trip in June ended without a prisoner release.
A short flightMeanwhile that Saturday morning, back in Venezuela, the “Citgo 6,” were skeptical of whether they were actually going home.
The seven were loaded onto a small plane, Toledo recalled, and in addition to the handcuffs, their feet were tied.
After a short flight, the plane landed in the Caribbean island of St. Vincent and the Grenadines, Toledo and Pereira told CNN.
The US envoy brought his Venezuelan counterpart on board to check Campo Flores and Flores de Freitas before he was brought to a plane parked at the far end of the runway, with the seven Americans on board, to do a head count.
We’re taking you back.”A group of seven Americans are pictured with their families and officials upon returning to the United States after being detained in Venezuela.
Courtesy Jorge ToledoShortly after the head count, the Venezuelans crossed to their plane, and the seven Americans crossed to theirs.
I saw the two individuals walking toward the jet with the Venezuelan identification and then we jumped into the” US plane, Toledo said.
The reunion was “a magical moment,” both Pereira and Toledo told CNN.
Courtesy Jorge Toledo“I basically met for the first time, almost for the first time, my two granddaughters,” Toledo told CNN.
“This has been like a bomb in my life.”For some, the nightmare continuesFor at least four Americans, however, the nightmare continues.
Luke Denman, Airan Berry, Jerrel Kenemore, and Eyvin Hernandez are all detained in Venezuela; Hernandez and Kenemore were recently designated as wrongfully detained by the US State Department.
Source